I recently reviewed the script for Harry Potter and the Cursed Child, but now I can say that I have been one of those happy people who have seen the play and here are my spoiler free thoughts.

What?
A day of adventures in magic world, also known as Harry Potter and the Cursed Child

Where?
First row at The Palace Theater, London, UK

When?
Sunday, 4th of September

If I had to sum up the play in one word it would be “magical”. I honestly thought that the people who worked on the play had only one thought in their minds: “Believe in magic, muggle!” And, indeed, believe I did. 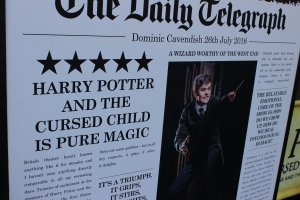 Although I didn’t really like the book, I predicted that in my opinion play will be a lot better, because the actors will add their share to the characters, the voice and props will do their job. And they did, they did do an amazing job, turning the dry jokes and sentences into a lot of emotions. Showing an amazing speed and creativity, turning the story in reality.

I have to admit that the production of this play was at an amazing level and well, I honestly now understand why the tickets cost as much as they do. The music, special effects, lights, choreography, speed and magic were amazing! I mean I was sitting in the front row and actually didn’t have a clue how they did all those things. Perhaps for someone who has studied magic, it wouldn’t seem as impressive, but it was for me. And I really want to stress the amazing speed and the sneaky and clever ways that were used to transport the actors from one place to another, sure, later logic kicked in, but that didn’t change the admirable performance in my eyes.

Honestly I was impressed with almost everything and everyone in this play, but I have to especially say that Scorpius was incredible. He was slightly different than in the book and I absolutely loved him (although in the book he was a bit ‘meh’ for me), Anthony Boyle (Scorpius) really did an amazing job at showing his character’s issues and traumas, he will always be burned in my mind as Scorpius now and I feel like he’s at least a bit of a genius. (He actually got me in tears from laughing in the second part.)

And speaking of ‘burned in my mind’, there has been a lot of controversy about Noma Dumezweni as Hermione and I have to admit that I had to remind myself several times that she is Hermione during the play, when she was speaking or doing something. But nevertheless, her acting was great and I definitely can see her as Hermione now. I liked her and her acting a lot and admire her for overcoming all the obstacles and even hate that has been thrown at her. 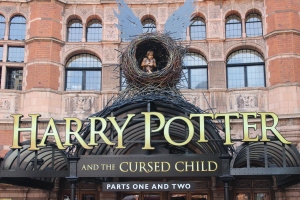 There, I guess, are two more things I have to mention, first: Ron! I didn’t really think or like him in the book and he didn’t seem like the old Ron I knew. Sure, ageing changes people, but it just seemed weird, a bit cheap and not very entertaining, but Paul Thornley did a great job, turning those jokes into actual laughter – the whole audience was laughing and having a great time, no dryness or stupidity at all. It was lovely to see such warmth and laugh from the audience, it was often silly and the actor played it brilliantly.

I was not sure, if Draco was what I expected, because I had no real expectations. I have never imagined Draco grown up and he wasn’t really the same as a teenager, but James Howard made the adult Draco very interesting. He was quite excellent at his role and his voice… ohohohoho… was just amazing.

There are many other things I could mention about the play, not all of them are good! But I won’t, hoping that some day you will all get a chance to see it— live or on screens! I hope it will be worth it for you. It was for me and it will always be in my memory as an excellent experience. It is really hard not to explain how many genius solutions were shown, how amazing some details were and several magic tricks, but I guess, that is something I will only be able to talk about with those, who have seen it or who really, really want to know it… but even then, probably, I would not be able to do it justice. But for now, I need to #KeepTheSecrets.

I also got a bunch of merchandise, couldn’t resist a tote bag and a book with photographs and texts about the play and a couple of cards for my friends. 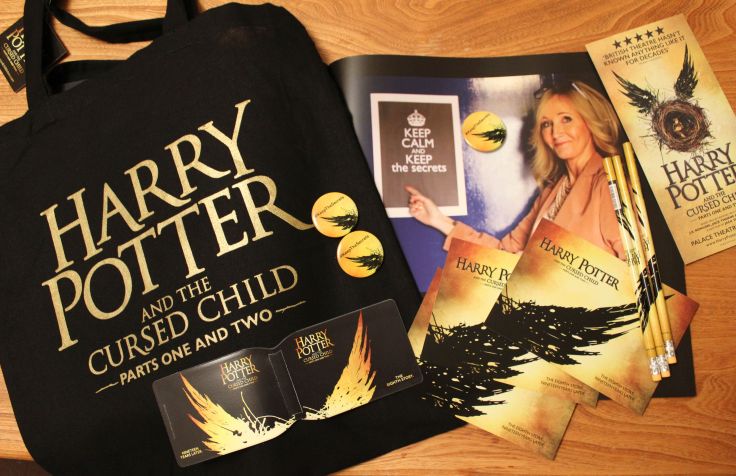 So these are my thoughts on the play. If you have any specific questions, please note that you can ask them, but I would really prefer not to spoil anything major, if you have a spoiler to talk about, please start your comment with ‘Spoiler Alert’, so everyone knows it and has the choice to not read the comment. And I will do the same, if I answer any spoiler-ish questions. Hope you enjoyed the post and as the last thing I have to mention that my boyfriend Tom said that it was the best play he has ever seen and the work that was put into it is just incredible. So… Blimey, there’s two of them!

29 thoughts on “Play Review: Harry Potter and the Cursed Child”